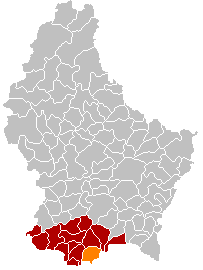 Dudelange is a commune with town status in southern Luxembourg. It is the fourth-most populous commune, with 19,734 inhabitants. Dudelange is situated close to the border with France.

As of 2015, the town of Dudelange, which lies in the centre of the commune, has a population of 19,734, making it Luxembourg's third-most populous town. The commune also includes the smaller town of Budersberg, to the north-west. The Mont Saint-Jean, close to Budersberg, hosts the ruins of a medieval castle.