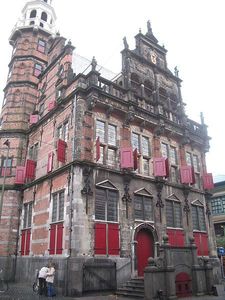 The Old City Hall in The Hague is a Renaissance style building on the Groenmarkt near the Grote Kerk. It is the former seat of the city's government, and remains a place where residents hold civic wedding ceremonies, and where the Royal family register their family births. Other families do this at the current city hall located in the large white building on the Kalvermarkt, near the Public library.
The town hall contains a historical picture gallery. The building was considered very large and imposing in its day; just after it was built in 1566 Lodovico Guicciardini referred to The Hague as the most beautiful, richest, and biggest village of Europe. However, The Hague was not a walled town and therefore Guicciardini categorized it with the villages. For a village, the city hall must have seemed quite grand. That The Hague was thus vulnerable to attack makes it all the more amazing that the old City Hall survived the Protestant Revolution without damage to older ornaments and windows.