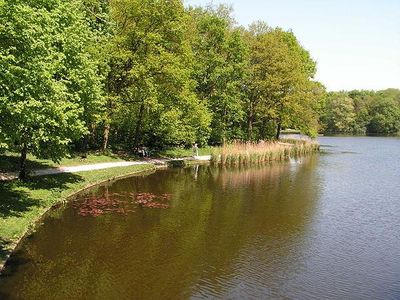 Haagse Bos is a rectangular neighbourhood and forest in the Haagse Hout district of The Hague, Netherlands, reaching from the old city centre in the south-west to the border of Wassenaar in the north-east. It is also one of the oldest remaining forests of the country. During World War II, the park was used by the Germans for launching V-1 and V-2 rockets.
Originally, the Haagse Bos was a section of a bigger forest that stretched from 's-Gravenzande to Alkmaar. This was simply called Die Hout . The title eventually gave way to the name Houtland and later became Holland. From this original forest only the Haagse Bos remains. During the reign of William II and Floris V, the forest was considerably reduced to make space and provide wood for the growing nearby fortress, the Binnenhof, and the surrounding village of The Hague. However, even in the Middle Ages there were strict rules in place to protect the Haagse Bos from becoming completely cut down, since the forest was a popular hunting area of the Dutch counts.