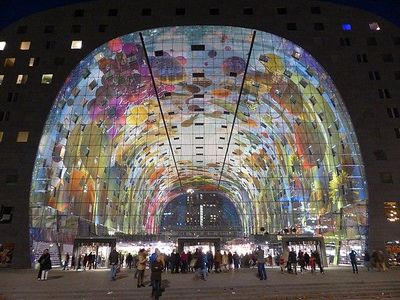 Rotterdam ) is the second largest city and municipality in the Netherlands. It is in the province of South Holland, at the mouth of the Nieuwe Maas channel leading into the Rhine–Meuse–Scheldt delta at the North Sea. Its history goes back to 1270, when a dam was constructed in the Rotte. In 1340, Rotterdam was granted city rights by the Count of Holland. The Rotterdam–The Hague metropolitan area, with a population of approximately 2.7 million, is the 10th-largest in the European Union and the most populous in the country.

A major logistic and economic centre, Rotterdam is Europe's largest seaport. In 2020, it had a population of 651,446 and is home to over 180 nationalities. Rotterdam is known for its university, riverside setting, lively cultural life, maritime heritage and modern architecture. The near-complete destruction of the city centre in the World War II Rotterdam Blitz has resulted in a varied architectural landscape, including skyscrapers designed by architects such as Rem Koolhaas, Piet Blom and Ben van Berkel.