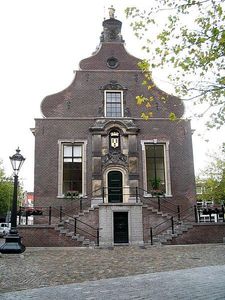 Schiedam ) is a city and municipality in the west of the Netherlands. It is located in the Rotterdam–The Hague metropolitan area, west of Rotterdam, east of Vlaardingen, and south of Delft. In the south the city is connected with the village of Pernis by the Beneluxtunnel.

The city is known for its historical center with canals, and for having the tallest windmills in the world. Schiedam is also well known for the distilleries and malthouses and production of jenever − such as the internationally renowned Ketel One − so much so that in French and English the word schiedam refers to the town's Holland gin. This was the town's main industry during the early Industrial Revolution in the 18th and 19th century, a dark period to which it owed its former nickname "Zwart Nazareth" or "Black Nazareth". Furthermore, the city is known for Saint Lidwina, one of the most famous Dutch saints .