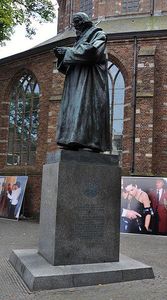 Naarden ] ) is a city and former municipality in the Gooi region in the province of North Holland, Netherlands. It has been part of the new municipality of Gooise Meren since 2016.

Naarden was granted its city rights in 1300 and later developed into a fortified garrison town with a textile industry.