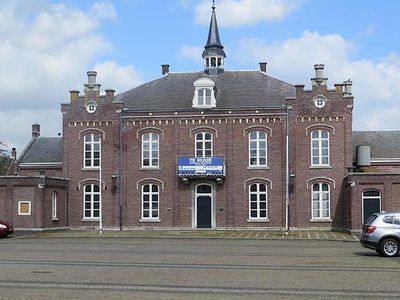 Wessem is a small village in the Netherlands, in the province of Limburg. Wessem is a part of the municipality of Maasgouw. As of 2002, Wessem had a population of 1,750.
Little is known about the early history. The name sounds Frankish and excavation show that it was inhabited in pre-Roman times. It was inhabited in that time by the Eburones, a Belgic tribe based on north-eastern Gaul in the 1st century BC. Julius Caesar described them as being of Germanic origin. They are believed to have lived between the Meuse and Rhine rivers. Ambiorix, an Eburonian chief, is known for having led a rebellion against the Romans in 54 BC. Because of this rebellion the Eburones were all but exterminated by the Romans and their land was destroyed. They were replaced by the Tungri, a Germanic tribe that was Celticised but in villages on the other side of the river Meuse the Eburones continued to exist what would explain the fact that the Limburgs language spoken on the west bank of the river Meuse still has some traces of the old Celtic language spoken by the Eburones.