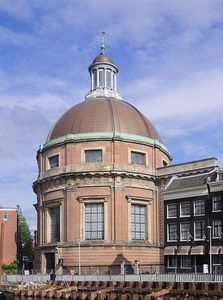 The Ronde Lutherse Kerk or Koepelkerk is a former Lutheran church in Amsterdam, located at the Singel. The church can be easily seen from the Singel by its copper dome.

The church was designed by Adriaan Dortsman and was opened in 1671. In 1822 the church was nearly destroyed and was rebuilt in 1826.The organ was built by J Batz in 1830 and it was restored in 1983 by Flentrop Orgelbouw. In 1935 the Lutherans left the building and it became a concert hall. In 1975 a tunnel was built by the neighboring Sonesta Hotel, today called the Renaissance Amsterdam Hotel, for its own access. The hotel rents the church from the Lutheran church which is still the owner today. In 1983 the church was closed for restoration, but in 1993 the dome caught fire; the church was again restored.