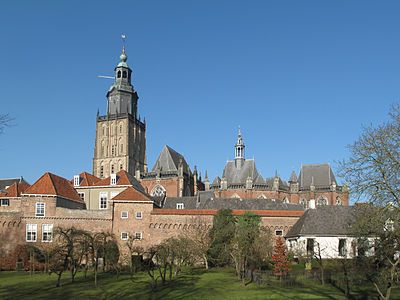 Zutphen ] ) is a city and municipality located in the province of Gelderland, Netherlands. It lies some 30 km northeast of Arnhem, on the eastern bank of the river IJssel at the point where it is joined by the Berkel. First mentioned in the 11th century, the place-name appears to mean "south fen" . In 2005, the municipality of Zutphen was merged with the municipality of Warnsveld, retaining its name. In 2019, the municipality had a population of 47,609.

In about 300 AD, a Germanic settlement was the first permanent town on a complex of low river dunes. Whereas many such settlements were abandoned in the early Middle Ages, Zutphen on its strategic confluence of IJssel and Berkel stayed. After the incorporation of the IJssel lands in Charlemagne's Francia, Zutphen became a local centre of governance under a count. The Normans raided and ravaged it in 882. Afterwards a circular fortress was built to protect the budding town against Viking attacks.