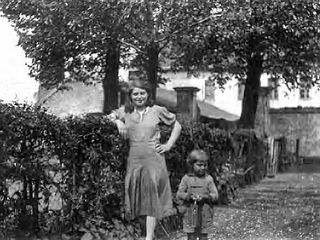 The origin of this mill is unusual. In the 17th century a Copper Mill stood here. This industry of copper milling was unique to the south-eastern part of Limburg. The ore was ground here. The zinc came from the zinc mines of La Calamine and Plombières (Belgium), the copper from the mountains of the Harz (Germany) and also from Scandinavia. This would explain why one of the early owners was  from Gothenburg, Bartholomeus Fredericus Fauche.
The Copper mill was replaced in 1736 by a large factory with woollen mills and various workshops with looms which were driven by the mill. The blanket industry of Vaals was well known. Over time the mill was used for spinning, weaving, fulling (a process of thickening woollen fabric) and for making blankets.
In the 19th century Richard Boventer from Vaals is listed as owner of the mill. In 1885 a separate building housing a steam engine which drove the machines was built next to the mill.
The mill burned down completely twice and was completely rebuilt twice. It seems that it’s use as an industrial complex was quite profitable. In 1905 the looms and spinning machines disappeared and the mill was converted to a grain mill. This was a common development with water mills around this time. The availability of electricity and petrol engines made the watermill obsolete over the years. The decline of the mill continued after the war years until the present day despite the best efforts of the owner.