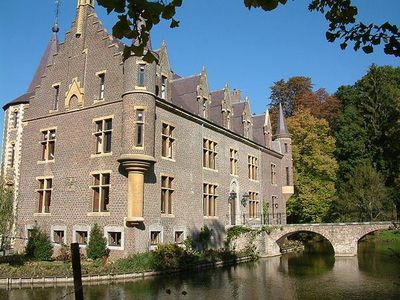 Ter Worm or Terworm Castle is a castle located in the municipality of Heerlen, Limburg Province, Netherlands. The castle is part of the Terworm estate.
The present building dates largely from the 17th century when the original 15th-century fortified building was converted into a house. It comprises two wings in a T-shaped floor plan surrounded by a moat. The main building is accessible at the front via a marl stone bridge dating from 1843 leading to the main entrance. Between the two wings is a corner tower, which is the oldest part of the castle dating back to the 15th century. Originally round, the tower was converted to an octagonal in the 17th century . The west wing can be dated to 1716, while the south wing has a keystone with the year 1718. The castle garden is a reconstruction based on a French rococo garden laid out by Count Vincent van der Heyden-Belderbusch in 1787 with roses, lavender and boxwood. The garden is a favourite wedding location and admission is free.