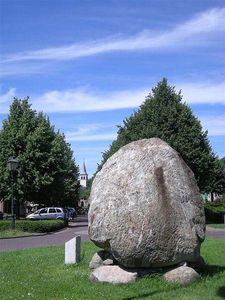 Oudemirdum is a small village in De Friese Meren municipality in the province Friesland of the Netherlands and has around the 1330 citizens .
The name Oudemirdumis first mentioned in 1329, but the first settlements were before 850. Previously changed the name of ‘Meretha’, in ‘Merthen’, ‘Maerdum’, ‘Merthum’ and ‘Mirdum’ into ‘Oudemirdum’. Through the old village with a brink does Oudemirdum few Drents on. That old village, from the late Middle Ages, consists De Brink, the church en de Alde Buorren. In the 19th century The center was expanded with Jan Schotanuswei and the Tsjerkestrjitte, both with a few old farmhouses and houses on both sides of the road.