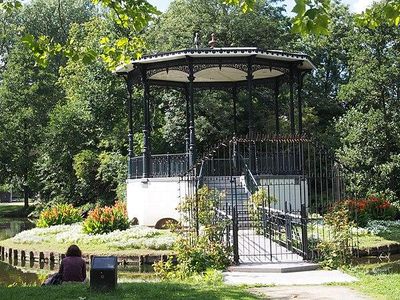 The Vondelpark is a public urban park of 47 hectares in Amsterdam, Netherlands. It is part of the borough of Amsterdam-Zuid and situated west from the Leidseplein and the Museumplein. The park was opened in 1865 and originally named Nieuwe Park , but later renamed to Vondelpark, after the 17th-century playwright and poet Joost van den Vondel. Yearly, the park has around 10 million visitors. In the park is an open-air theatre, a playground and several horeca facilities.

In 1864 a group of citizens led by Christiaan Pieter van Eeghen established the Vereeniging tot Aanleg van een Rij- en Wandelpark . They bought several hectares of grass-land and marshes at the rim of the city of Amsterdam, in order to create the new park. They assigned the architect Jan David Zocher to design it, and in 1865 "Het Nieuwe Park" was opened for members of the association and in exchange for a fee also for other citizens.