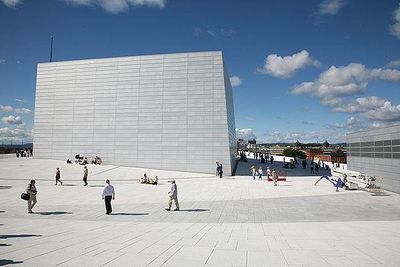 The Oslo Opera House is the home of the Norwegian National Opera and Ballet, and the national opera theatre in Norway. The building is situated in the Bjørvika neighbourhood of central Oslo, at the head of the Oslofjord. It is operated by Statsbygg, the government agency which manages property for the Norwegian government. The structure contains 1,100 rooms in a total area of 49,000 m2 . The main auditorium seats 1,364 and two other performance spaces can seat 200 and 400. The main stage is 16 m wide and 40 m deep. The angled exterior surfaces of the building are covered with marble from Carrara, Italy and white granite and make it appear to rise from the water. It is the largest cultural building constructed in Norway since Nidarosdomen was completed circa 1300.
In 1999, after a long national debate, the Norwegian legislature decided to construct a new opera house in the city. A design competition was held and, of the 350 entries received, the judges chose that of the Norwegian architectural firm Snøhetta. Construction started in 2003 and was completed in 2007, ahead of schedule and 300 million NOK under its budget of 4.4 billion NOK . The gala opening on 12 April 2008 was attended by His Majesty King Harald, Queen Margrethe II of Denmark and President Tarja Halonen of Finland and other leaders. During the first year of operation, 1.3 million people passed through the building's doors.