History of the Swedish nobility 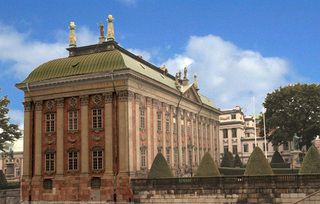 The establishment of the Swedish nobility is estimated to be 1280. At this time the Decree of Alsnö was issued, which regulated the so-called noble tax privileges for the first time. Medieval noblemen were those who provided armoured service to the King and were therefore free from paying taxes. This is the foundation for what was later known as the nobility. The nobility had a significant influence in Sweden until 1866 when a bicameral parliament replaced the previous parliament of four estates. The era of the Swedish empire in the 1600s, and the Age of Liberty in the 1700s were the political heyday of the nobility.
At Erik XIV of Sweden's coronation in 1561, counts and barons were appointed for the first time in Sweden. This divided the nobility into three classes. At John III of Sweden's coronation in 1569, noble privileges were issued. According to these privileges, a noble person was born into a noble family or had nobility conferred upon them by the King.
King Gustavus Adolphus of Sweden’s Order of the Nobility from 1626 involved structuring the nobility in the newly created institution, the House of Nobility. The nobility would, as the first level beneath the monarch, be a part of a four chamber government comprising the nobility, clergy, burghers and peasants.
At their individual parliamentary sessions at the House of Nobility, the nobility would be headed by the Lord Marshal. For the next 240 years he would be a particularly powerful figure in Swedish politics.
In 1719 political power was passed from the upper nobility to the lower nobility, who had a large majority in the House of Nobility.
King Gustav III of Sweden's bloodless revolution in 1772 resulted in political power returning to the King.
After the 1809 revolution, the nobility regained nobility the partial power that it lost through Gustav III of Sweden's policies.
In 1865 the new parliamentary system was adopted with two chambers representing all four estates. From here on, the nobility were no longer able to play any political role.
The monarch’s ability to ennoble was revoked in 1975. Since 2003 the House of Nobility has been a private organisation. The House of Nobility is currently governed by an assembly of the nobility that meets every three years. Operations are managed by an executive with a secretariat headed by an officer with the title, secretary of the House of Nobility.