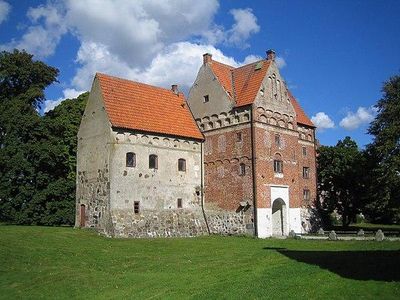 Borgeby Castle lies in Lomma Municipality, Scania in southern Sweden, beside the Kävlingeån, the largest river in Scania.

The castle is built on the site of an 11th-century castle or fortress. Finds at the site may relate to the reign of King Harald Bluetooth. It may be reconstructed similar to the Trelleborg type with a diameter of 150 metres. Construction must have been in several phases with two separate ditches. The buildings on the site burned down during the Viking Era. Excavations in 1998 found evidence of a mint. This is thought to prove that this site belonged from its beginnings until 1536 to the Archbishop of Lund.