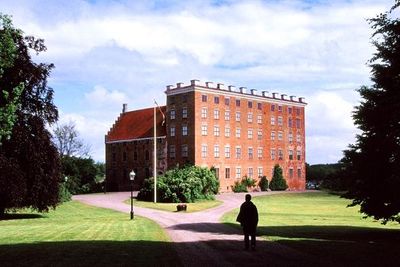 Svaneholm Castle is located on the shore of Lake Svaneholmssjön in Skurup Municipality, Scania, Sweden. It has been used as a filming location including for the TV series Wallander.
During the Middle Ages the residence was called Skurdorp , which was fortified and situated next to the parish church, where remains still can be seen. During the midst of the fifteenth century it was owned by guardsman Henning Meyenstorp and through marriage it later came to the possession of the Sparre-family. Approximately 1530 the residence was moved from Skurup to an islet in the Lake Svaneholmssjön, after that it was called Svaneholm. Svaneholm Castle was initially erected in the 1530s by the Danish knight and royal advisor Mourids Jepsen Sparre .