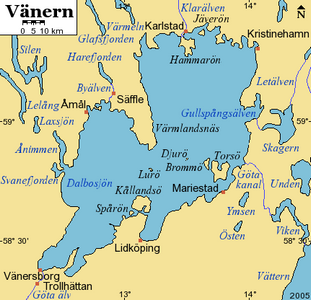 The southeastern part of the Vänern is a depression that appears to have come into being by erosion of Paleozoic-aged sedimentary rock during the Quaternary glaciation that reached to the area. This erosion would have re-exposed parts of the Sub-Cambrian peneplain. Because the southern and eastern shores are parts where the Sub-Cambrian peneplain gently tilts towards the north and west, respectively, the lake is rather shallow at this places. The western shore of the lake largely follows a fault scarp associated to Vänern-Göta Fault.