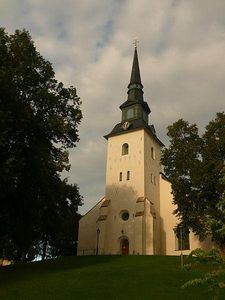 Lindesberg is a locality and the seat of Lindesberg Municipality, Örebro County, Sweden with 9,672 inhabitants in 2017.
Lindesberg has centuries old history, being the center of an old mining district. The earliest known traces of a town are in the foundations of the 14th century stone church. That town was however known as Lindesås. It got its charter and current name in 1643, granted by Queen Christina, making it one of the now defunct Cities of Sweden. The name lind means the linden tree , which is why the coat of arms depicts a tree. The mining district Lindesberg was mentioned on the 16th century grand map Carta Marina.