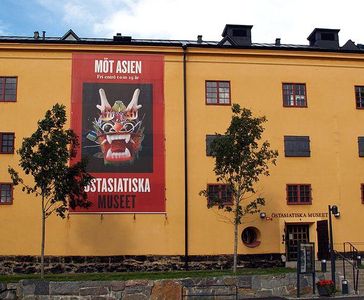 The Museum of Far Eastern Antiquities , located in Stockholm, Sweden, is a museum launched by Sweden's Parliament in 1926, with the Swedish archaeologist Johan Gunnar Andersson as founding director. The museum is located on Skeppsholmen in the building Tyghuset and since 1999 the museum is a part of the public Swedish National Museums of World Culture.

The museum was originally based mainly on Andersson's groundbreaking discoveries in China, during the 1920s, of a hitherto unknown East Asian prehistory. The museum today has wide-ranging collections also from Japan, Korea and India. It exhibits of both archeology, classical arts and contemporary culture, and holds a large research library open to the public. The last time the museum published a comprehensive catalog was 1963 . The museum also publishes an annual journal focused on research on ancient East Asia, the Bulletin of the Museum of Far Eastern Antiquities.