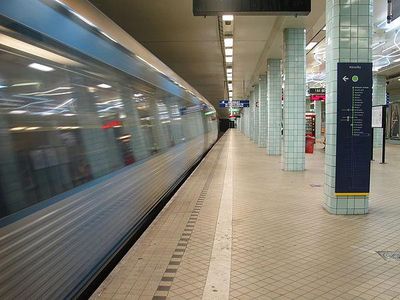 Hötorget metro station is a station on the green line of the Stockholm metro, located by Hötorget in Norrmalm, central Stockholm. The station was inaugurated on 26 October 1952 as the east terminus of the stretch between Hötorget and Vällingby. The line was extended to Slussen on 24 November 1957, thereby connecting west and east sections of the green line. Its 1950s signage and decor have been deliberately retained. It was called Kungsgatan until 1957. The name was changed to Hötorget when the southern and western tracks were joined as one . The distance to Slussen is 1.5 km .