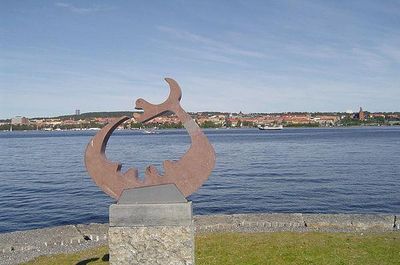 Storsjön is the fifth largest lake in Sweden, with an area of 464 km2 and a greatest depth of 74 m . It is located in the province of Jämtland in modern Jämtland County. From Storsjön runs the river Indalsälven and the lake contains the major island Frösön. The city of Östersund is located on the east shore of the lake, opposite Frösön.

Storsjön is said to be the home of Storsjöodjuret, a cryptid lake monster not unlike the Loch Ness Monster, and every now and then there are new reports of people having spotted it. Descriptions of the creature have varied over the years. Some have described it as being serpentine in appearance, with multiple humps, a feline or canine-like head and grayish skin. Others have claimed that the creature is short in stature and morbidly obese, with a roundish skull.