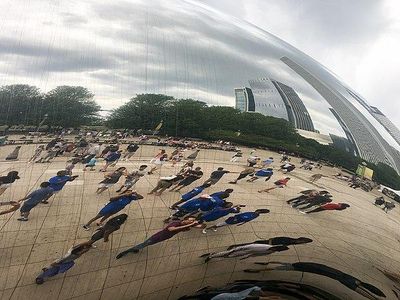 Cloud Gate is a public sculpture by Indian-born British artist Sir Anish Kapoor, that is the centerpiece of AT&T Plaza at Millennium Park in the Loop community area of Chicago, Illinois. The sculpture and AT&T Plaza are located on top of Park Grill, between the Chase Promenade and McCormick Tribune Plaza & Ice Rink. Constructed between 2004 and 2006, the sculpture is nicknamed The Bean because of its shape, a name Kapoor initially disliked, but later grew fond of. Made up of 168 stainless steel plates welded together, its highly polished exterior has no visible seams. It measures 33 by 66 by 42 feet , and weighs 110 short tons .

Kapoor's design was inspired by liquid mercury and the sculpture's surface reflects and distorts the city's skyline. Visitors are able to walk around and under Cloud Gate's 12-foot high arch. On the underside is the "omphalos" , a concave chamber that warps and multiplies reflections. The sculpture builds upon many of Kapoor's artistic themes, and it is popular with tourists as a photo-taking opportunity for its unique reflective properties.