House of the Temple

RouteYou » Wikipedia » Places of interest » House of the Temple 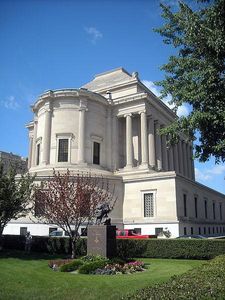 The House of the Temple is a Masonic temple in Washington, D.C., United States that serves as the headquarters of the Scottish Rite of Freemasonry, Southern Jurisdiction, U.S.A.

Designed by John Russell Pope, it stands at 1733 16th Street, N.W., in the Dupont Circle neighborhood, about one mile directly north of the White House. The full name of the Supreme Council is "The Supreme Council of the Inspectors General Knights Commander of the House of the Temple of Solomon of the Thirty-third degree of the Ancient and Accepted Scottish Rite of Freemasonry of the Southern Jurisdiction of the United States of America." It was modeled after the tomb of Mausolus at Halicarnassus.