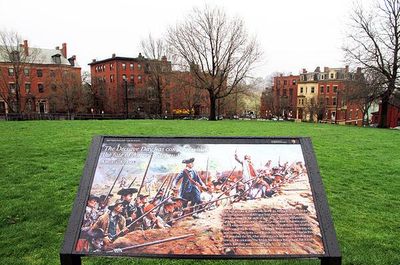 The Bunker Hill Monument was erected to commemorate the Battle of Bunker Hill, which was among the first major battles between British and Patriot forces in the American Revolutionary War, fought there June 17, 1775. The 221-foot granite obelisk was erected between 1825 and 1843 in Charlestown, Massachusetts, with granite from nearby Quincy conveyed to the site via the purpose-built Granite Railway, followed by a trip by barge. There are 294 steps to the top.
An exhibit lodge built adjacent to the monument in the late 19th century houses a statue of fallen hero Dr. Joseph Warren. Bunker Hill is one of the sites along the Freedom Trail and is part of Boston National Historical Park.