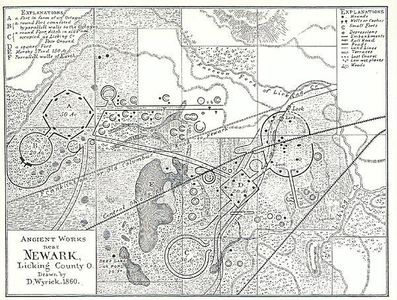 The Newark Earthworks in Newark and Heath, Ohio, consist of three sections of preserved earthworks: the Great Circle Earthworks, the Octagon Earthworks, and the Wright Earthworks. This complex, built by the Hopewell culture between 100 BCE and 400 CE, contains the largest earthen enclosures in the world, and was about 3,000 acres in total extent. Less than 10 percent of the total site has been preserved since European-American settlement; this area contains a total of 206 acres . Newark's Octagon and Great Circle Earthworks are managed by the Ohio History Connection. A designated National Historic Landmark, in 2006 the Newark Earthworks was also designated as the "official prehistoric monument of the State of Ohio."
This is part of the Hopewell Ceremonial Earthworks, one of 14 sites nominated in January 2008 by the U.S. Department of the Interior for potential submission by the United States to the UNESCO World Heritage List.