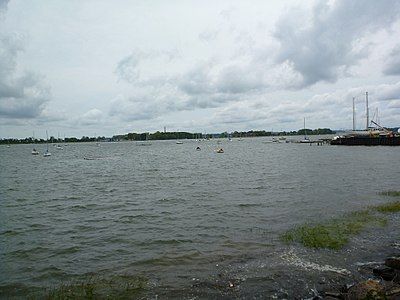 Hart Island, sometimes referred to as Hart's Island, is located at the western end of Long Island Sound, in the northeastern Bronx in New York City. Measuring approximately 1 mile long by 0.33 miles wide, Hart Island is part of the Pelham Islands archipelago, to the east of City Island.

The island's first public use was as a training ground for the United States Colored Troops in 1864. Since then, Hart Island has been the location of a Union Civil War prison camp, a psychiatric institution, a tuberculosis sanatorium, a potter's field with mass burials, a homeless shelter, a boys' reformatory, a jail, and a drug rehabilitation center. Several other structures, such as an amusement park, were planned for Hart Island but not built. During the Cold War, Nike defense missiles were stationed on Hart Island. The island was intermittently used as a prison and a homeless shelter until 1967, and the last inhabited structures were abandoned in 1977. The island now serves as the city's potter's field, run by the New York City Department of Correction until 2019, when the New York City Council voted to transfer jurisdiction to the New York City Department of Parks and Recreation.