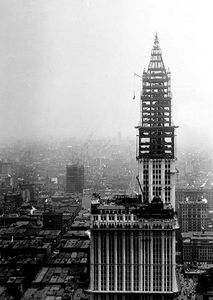 The Woolworth Building is an early American skyscraper designed by architect Cass Gilbert and located at 233 Broadway in Manhattan, New York City. It was the tallest building in the world from 1913 to 1930, with a height of 792 feet . More than a century after its construction, it remains one of the 100 tallest buildings in the United States.

The Woolworth Building is located in Manhattan's Tribeca neighborhood, bounded by Broadway and City Hall Park to its east, Park Place to its north, and Barclay Street to its south. It consists of a 30-story base topped by 30-story tower. Its facade is mostly decorated with terracotta, though the lower portions are limestone, and it features thousands of windows. The ornate lobby contains various sculptures, mosaics, and architectural touches. The structure was also designed with several amenities and attractions, including a now-closed observatory on the 57th floor and a private swimming pool in the basement.