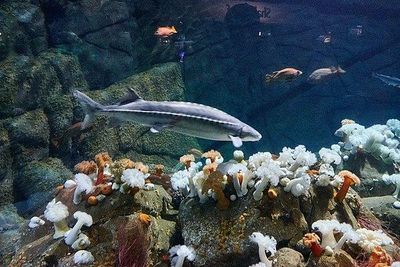 Monterey Bay Aquarium is a nonprofit public aquarium in Monterey, California. Known for its regional focus on the marine habitats of Monterey Bay, it was the first to exhibit a living kelp forest when it opened in October 1984. Its biologists have pioneered the animal husbandry of jellyfish and it was the first to successfully care for and display a great white shark. The organization's research and conservation efforts also focus on sea otters, various birds, and tunas. Seafood Watch, a sustainable seafood advisory list published by the aquarium beginning in 1999, has influenced the discussion surrounding sustainable seafood.

Early proposals to build a public aquarium in Monterey County were not successful until a group of four marine biologists revisited the concept in the late-1970s. Monterey Bay Aquarium was built at the site of a defunct sardine cannery and has been recognized for its architectural achievements by the American Institute of Architects. Along with its architecture, the aquarium has won numerous awards for its exhibition of marine life, ocean conservation efforts, and educational programs.