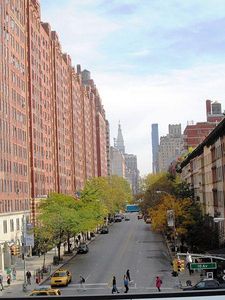 Source: Beyond My Ken

23rd Street is a broad thoroughfare in the New York City borough of Manhattan, one of the major two-way, east-west streets in the borough's grid. As with Manhattan's other "crosstown" streets, it is divided into its east and west sections at Fifth Avenue. The street runs from Avenue C and FDR Drive in the east to Eleventh Avenue in the west.

23rd Street was created under the Commissioners' Plan of 1811. The street hosts several famous hotels, including the Fifth Avenue Hotel and Hotel Chelsea, as well as many theaters. Several skyscrapers are located on 23rd Street, including the Flatiron Building, the Metropolitan Life Insurance Company Tower, and One Madison.