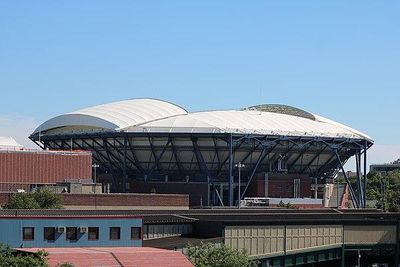 Arthur Ashe Stadium is a tennis stadium at Flushing Meadows–Corona Park in Queens, New York City. Part of the USTA Billie Jean King National Tennis Center, it is the main stadium of the US Open tennis tournament, and the largest tennis stadium in the world, with a capacity of 23,771.
The stadium is named after Arthur Ashe, winner of the 1968 inaugural US Open, the first in which professionals could compete. The original stadium design, completed in 1997, had not included a roof. After suffering successive years of event delays from inclement weather, a new lightweight retractable roof was completed in 2016.