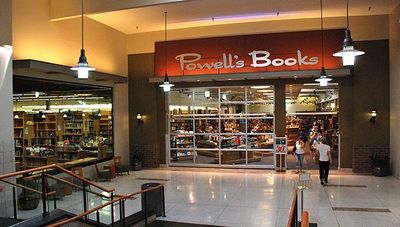 Powell's Books is a chain of bookstores in Portland, Oregon, and its surrounding metropolitan area. Powell's headquarters, dubbed Powell's City of Books, claims to be the largest independent new and used bookstore in the world. Powell's City of Books is located in the Pearl District on the edge of downtown and occupies a full city block between NW 10th and 11th Avenues and between W. Burnside and NW Couch Streets. It contains over 68,000 square feet , about 1.6 acres of retail floor space. CNN rates it one of the "coolest" bookstores in the world.
The City of Books has nine color-coded rooms and over 3,500 different sections.
The inventory for its retail and online sales is over four million new, used, rare, and out-of-print books. Powell's buys around 3,000 used books a day.