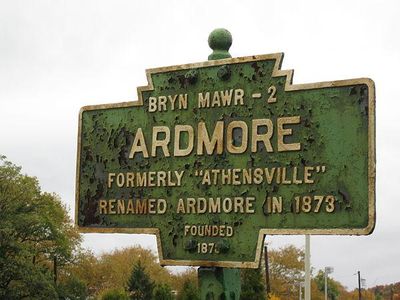 Ardmore is an unincorporated community and census-designated place in Delaware and Montgomery counties in the U.S. state of Pennsylvania. The population was 12,455 at the 2010 census. Ardmore is a suburb on the west side of Philadelphia, within Lower Merion Township in Montgomery County and Haverford Township in Delaware County. Originally named "Athensville" in 1853, the community and its railroad station were renamed "Ardmore" in 1873 by the Pennsylvania Railroad, on whose Main Line, west out of Philadelphia, Ardmore sits at Milepost 8.5.
According to the United States Census Bureau, the CDP has a total area of 2.0 square miles , all of it land. Ardmore is adjacent to Wynnewood , Haverford , Gladwyne , and Havertown . Residents from South East Ardmore and Wynnewood cooperate as the ArdWood Civic Association. The Ardmore Progressive Civic Association serves the historically black section of Ardmore bordered by ArdWood Civic Association, Haverford College, Montgomery Avenue, and the Montgomery/Delaware County line. The North Ardmore Civic Association represents residents of North Ardmore and Wynnewood north of Montgomery Avenue. The South Ardmore Betterment Alliance is a community group in the southern portion of Ardmore which organizes various community activities.