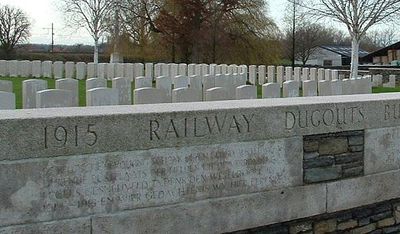 This spot was the location of the closest Advanced Dressing Stations behind Hill 60. These stations offered the first and most urgent medical treatment to the wounded, before they were moved to field hospitals behind the lines. To house the ADS’s, a number of shelters were dug into the nearby railway embankment.
The medical units working at Railway Dugouts were far from safe. Thomas William Watts, a member of a field ambulance team, was fatally wounded here just weeks after the gas attack at Hill 60.
Most of the dead in the cemetery were buried during 1916 and 1917. The different plots are arranged in a random pattern – usually an indication that the burials took place close to the front during the heat of battle