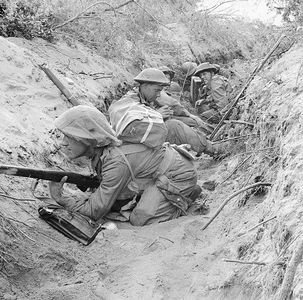 The Battle of Anzio was a battle of the Italian Campaign of World War II that took place from January 22, 1944 to June 5, 1944 . The operation was opposed by German forces in the area of Anzio and Nettuno. The operation was initially commanded by Major General John P. Lucas, of the U.S. Army, commanding U.S. VI Corps with the intention being to outflank German forces at the Winter Line and enable an attack on Rome.

The success of an amphibious landing at that location, in a basin consisting substantially of reclaimed marshland and surrounded by mountains, depended on the element of surprise and the swiftness with which the invaders could build up strength and move inland relative to the reaction time and strength of the defenders. Any delay could result in the occupation of the mountains by the defenders and the consequent entrapment of the invaders. Lieutenant General Mark W. Clark, commander of the U.S. Fifth Army, understood that risk, but Clark did not pass on his appreciation of the situation to his subordinate, Lucas, who preferred to take time to entrench against an expected counterattack. The initial landing achieved complete surprise with no opposition and a jeep patrol even made it as far as the outskirts of Rome. However, Lucas, who had little confidence in the operation as planned, failed to capitalize on the element of surprise and delayed his advance until he judged his position was sufficiently consolidated and he had sufficient strength.