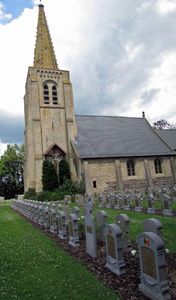 The graveyard at Oeren, in the shadow of the church, exceptionally does not lie by a hospital or a dressing station, but was a refuge for the overfilled graveyard at Alveringem.
In March 1915 there were already more than 200 soldiers buried in the graveyard at Alveringem. Because the condition there cannot be maintained, the organization of a military cemetery at Oeren is ordered, against the wishes of the little village. But that is also for a short period, at the beginning of November 1915 the graveyard at Oeren is ‘temporarily’ closed. After that the bodies of the fallen military personnel are sent to the military cemetery at Adinkerke. Only after 1917 would the military casualties be buried again in Oeren.