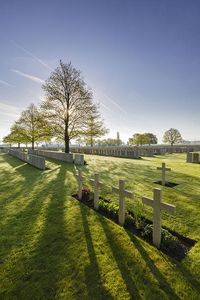 This was the site of a farm belonging to Remi Quaghebeur, close to the railway line between Hazebrouck and Poperinge. When the fighting became heavier at the end of April and the beginning of May 1915, so that the German guns could now fire further behind the British lines, a number of Casualty Clearing Stations were set up here. The location was easy to reach, easy to supply and casualties could easily be evacuated along the railway. It eventually became one of the largest hospital sites in our country during the First World War. The place came to be known as Remy Sidings, after the Remi who had once owned the farm. A French hospital first came here in May 1915. The British Casualty Clearing Stations followed from June 1915 onwards.
You can find out all about the history of the site in the interpretation centre. Entrance is free.
The presence of a large hospital site with French and British medical units inevitably meant that many thousands of wounded were brought here, some of whom sadly died. This resulted in the creation of the second largest Commonwealth war cemetery in Belgium (after Tyne Cot). According to the register, the cemetery currently contains 10,785 burials from the First World War. British, Canadian, Chinese, French, German and (3) American war dead are all buried here.