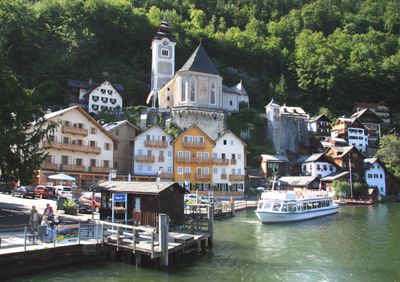 Did you know that the town of Hallstatt is flooded by Chinese tourists. They visit the town with no less than 1 million a year. It started when a Chinese influencer visited this town and reported on social media that this place should be on your bucket list. And that assignment was not ignored. They came to visit the town en masse. In the beginning, the tourist office was still happy and enthusiastic about the effect, but it turned, and it became a real problem. A solution was sought with the Chinese authorities. In China they created a Halstatt replica in 2012. Hallstatt was completely mirrored in an amusement park in the Chinese province of Guangdong . And the Chinese also loved that place. The effect was not what they had hoped for. Instead of getting "enough" of this town, many Chinese people, seeing the replica, felt that they should definitely see the real Halstatt. Result: Hallstatt became even more popular. So a tip if you put Hallstatt on your bicket list. Check when there is a holiday period in China.