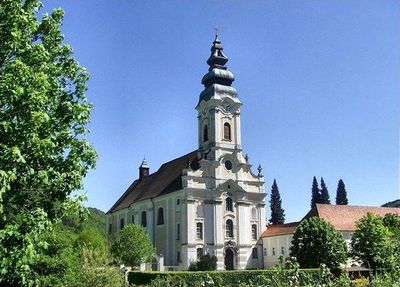 Engelszell Abbey is a Trappist monastery, the only one in Austria. It is located near Engelhartszell an der Donau in the Innviertel in Upper Austria.

The abbey was founded in 1293 by Bernhard of Prambach, Bishop of Passau, as a Cistercian monastery. It was settled in 1295 by monks from Wilhering Abbey, its mother house, and was of the filiation of Morimond Abbey. It suffered a considerable decline, both spiritual and financial, in the period of the Protestant Reformation, and for a time passed into private ownership. From 1618 onwards the intervention and support of Wilhering Abbey gradually restored it.