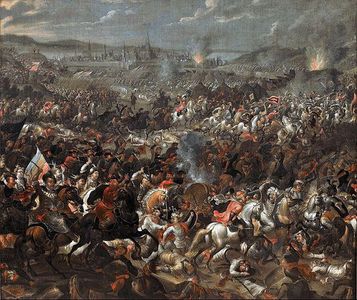 The Battle of Vienna ; Polish: bitwa pod Wiedniem or odsiecz wiedeńska ; Modern Turkish: İkinci Viyana Kuşatması, Ottoman Turkish: Beç Ḳalʿası Muḥāṣarası) took place at Kahlenberg Mountain near Vienna on 12 September 1683 after the imperial city had been besieged by the Ottoman Empire for two months. The battle was fought by the Habsburg Monarchy, the Polish–Lithuanian Commonwealth and the Holy Roman Empire, under the command of King John III Sobieski against the Ottomans and their vassal and tributary states. The battle marked the first time the Commonwealth and the Holy Roman Empire had cooperated militarily against the Ottomans, and it is often seen as a turning point in history, after which "the Ottoman Turks ceased to be a menace to the Christian world". In the ensuing war that lasted until 1699, the Ottomans lost almost all of Hungary to the Holy Roman Emperor Leopold I.
The battle was won by the combined forces of the Holy Roman Empire and the Polish–Lithuanian Commonwealth, the latter represented only by the forces of the Crown of the Kingdom of Poland . The Viennese garrison was led by Ernst Rüdiger Graf von Starhemberg, an Austrian subject of Holy Roman Emperor Leopold I. The overall command was held by the senior leader, the King of Poland, John III Sobieski, who led the relief forces.