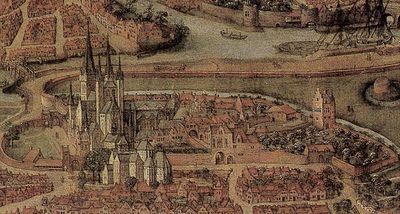 Saint Bavo's Abbey is a former abbey in the currently Belgian city of Ghent. It was founded in the 7th century by Saint Amand, who also founded Saint Peter's Abbey, Ghent, near the confluence of the Leie and Scheldt rivers. Originally, the abbey was also called Ganda, a name of Celtic origin, meaning "river mouth", referring to the Leie river debouching into the Scheldt river.
In the 9th century, the abbey was raided twice by Vikings, which made the monks flee to Laon. After an absence of nearly 50 years, they came back to Ghent and re-established the abbey. The German emperor Otto II saw the abbey as a strategical defense point on the Scheldt river in his eternal conflict with Louis V of France.