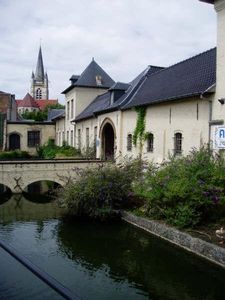 Ronse ; French: Renaix, French pronunciation: ​[ʁənɛ]) is a Belgian city and a municipality in the Flemish province of East Flanders. The municipality only encompasses the city of Ronse proper.The hills around Ronse show clues of human activity in the Paleolithic period. In the Neolithic, the area was populated with settled farmers and cattle breeders. Assorted fragments of building structures also attest of settlements in the area during Roman times. Ronse's urban center took shape in the 7th century, when Saint Amand – or one of his successors – built a church and monastery in honour of Saint Peter and Saint Paul. In the 9th century, Ronse and its monastery were given to the Inde Monastery by Louis the Pious. It is around that time that the relics of Saint Hermes arrived in Ronse. During those troubled times, Viking raids forced the monks to flee the town more than once, and the monastery was burnt by the Normans in 880. The relics were recovered in 940 and housed in a Romanesque-style crypt in 1083. The church of Saint Hermes, which was later built on top of the crypt, was consecrated in 1129. A pilgrimage in honour of the Saint, who had by then become known to cure mental illnesses, sustained the local economy. There is still a French saying today which translates as "Saint Hermes cures the area's madmen but keeps the Ronse dwellers as they are". The Lord of Ronse, Gerard de Wautripont, who was also in charge of the Inde Monastery at that time, gave the town all the privileges of a city in 1240. A few years later, the economy was flourishing and the Inde Monastery sold all its Ronse-based possessions. Until the French Revolution, the Ronse seigneury – a barony as of 1549 – included an enclave, the Ronse Franchise, which was administered by the Chapter of Saint Hermes with complete juridical and fiscal independence and its own justice system.