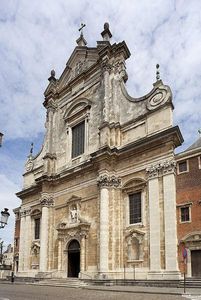 The St. Walburga Church is a 17th-century Roman-Catholic church in Bruges built by the Jesuits in a Baroque style. It is now a parish church and contains many valuable art objects.

In 1596 the Jesuits first built a chapel. Soon after they started building a church with a college, a convent, a chapel and garden. Formal construction of the church took place between 1619 and 1641 after a design by local Jesuit architect Pieter Huyssens . After his death, his fellow Jesuit J. Boulé took over the supervision of the construction works. The original designs of Huyssens with respect to the tower, the vault and windows of the nave were not fully executed due to financial constraints and rivalry among the Jesuits of Bruges and Antwerp. The church was dedicated to St. Francis Xavier by Msgr. Nicolas de Haudrion in 1642.