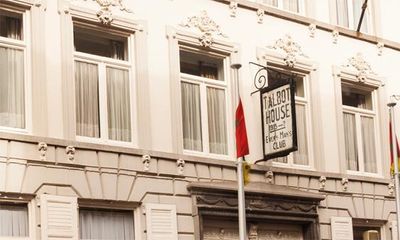 Soldiers at the front spent periods of time in the trenches, alternated with periods in support and periods of rest behind the lines. For the British troops, most of these rest periods were spent in and around Poperinge. In fact, the town was even known as Little Paris (although most preferred to spend longer periods of leave in the real Paris).

The bars and 'other facilities' available to the soldiers were not always morally uplifting. The men were often keen to spend their pay, because they never knew when - if ever - they would get another chance. And there were always people ready to provide them with what they wanted.

Talbot House was created by two British army chaplains as a more respectable alternative. Its founders were Philip Clayton - known as 'Tubby' to the troops - and Neville Talbot. The name of the house commemorated Lieutenant Gilbert Talbot, Neville's brother and Tubby's friend, who was killed at the front on 30 May 1915.

It was a club where both officers and ordinary soldiers were welcome, and where they were all treated the same. There was a chapel, a concert hall, a library and dormitories.

Talbot House still exists, more or less as it was during the war years. The visitors' entrance is around the corner in the Pottestraat. There is a small museum telling the story of wartime Poperinge.