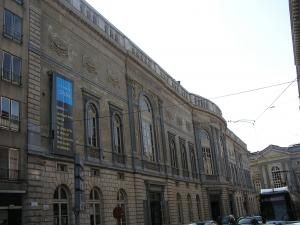 The architect Louis Roelandt was appointed to construct Le Grand Théâtre',which later became the opera. He also had to create the neighouring streets and the courthouse.

The piece which was allocated for the theater was long but particularly narrow. Therefore, he constructed several functional places next to eachother: the reception, an auditorium, the scene, the foyer and the concert hall.

The front shows fabulous animals, the muses of music, theatre and dance.

At the other side of the street, a unified building in neoclassical style was also constructed, to give the whole a harmoniuous look.