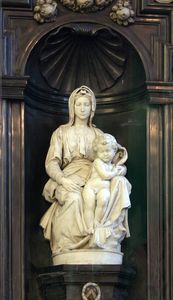 The Church of Our Lady contains the masterpiece 'The Madonna of Bruges', a marble sculpture by Michelangelo. During his journey to the Netherlands (1520–21), Albrecht Durer came to admire this masterpiece. The sculpture was removed twice from Belgium after its initial arrival. The first was in 1794, after French Revolutionaries had conquered the Austrian Netherlands during the French Revolutionary Wars; the citizens of Bruges were ordered to ship it and several other valuable works of art to Paris. It was returned after Napoleon's final defeat at Waterloo in 1815. The second removal was in 1944, during World War II, with the retreat of German soldiers, who smuggled the sculpture to Germany enveloped in mattresses in a Red Cross truck. It was discovered a year later in Altaussee/Austria within a salt mine and again returned. It now sits in the Church of Our Lady in Bruges, Belgium. This is part of the fact-based movie The Monuments Men.