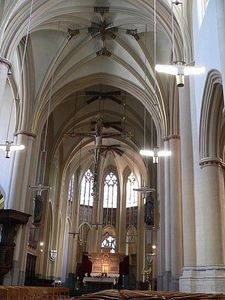 The St. Quentin Cathedral also called Hasselt Cathedral is an important Catholic church in Hasselt north of Belgium, which was elevated to the status of cathedral in 1967 when the diocese of Hasselt was created. Its construction began in the eleventh century, and continued for two centuries.
A first church was built in the eighth century, but was replaced in the eleventh century by a new Romanesque building. In the fifteenth century, the choir was, plus added four chapels rebuilt. Also in the fifteenth century, Hagenprekers of the Netherlands came to preach Protestantism in Hasselt, then follows a period of iconoclasm. Maaseik Hasselt temporarily declared the separation of the Church. During that time he destroyed the tabernacle, statues, the side altar and the main altar, under the command of Gerard van Groesbeek.