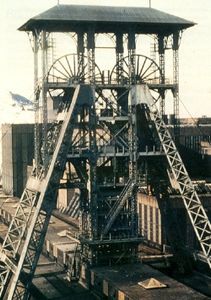 The mining museum (an Anchor Point of ERIH, The European Route of Industrial Heritage) is one of Beringen’s main attractions, retracing the industrial history of the region.

Under André Dumont’s guidance, the first coal-bearing drill cores were obtained in Campine in 1901, leading to several coalmines being established in the region. The first production in Koersel dates from 1919. The golden age of coal production started right after World War II and lasted until the late 1950s, when cheaper energy sources were made available elsewhere. The last coal mine in Beringen closed its doors on October 28, 1989. The remaining slag heaps and mining buildings are still very obvious around the city.