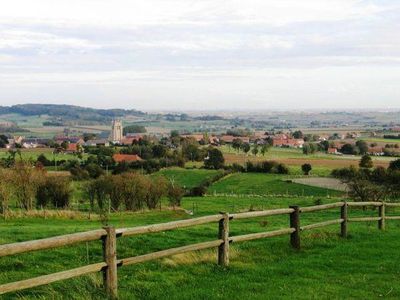 Heuvelland ) is a municipality located in the Belgian province of West Flanders. The municipality comprises the villages of Dranouter, Kemmel, De Klijte, Loker, Nieuwkerke, Westouter, Wijtschate and Wulvergem. Heuvelland is a thinly populated rural municipality, located between the small urban centres of Ypres and Poperinge and the metropolitan area of Kortrijk-Lille along the E17. On 1 January 2006 Heuvelland had a total population of 8,217. The total area is 94.24 km2 which gives a population density of 87 inhabitants per km2. The name heuvelland is Dutch meaning "hill country", as the municipality is characterized by the different hills on its territory.