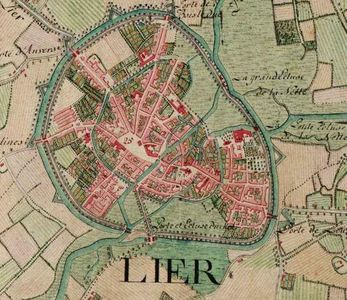 Lier is a municipality located in the Belgian province of Antwerp. It is composed of the city of Lier proper and the village of Koningshooikt. The city center is surrounded by the river Nete, which also cuts through it. Per January 1, 2010 Lier had a total population of 33,930. The total area is 49.70 km² which amounts to a population density of 669 inhabitants per km². Lier is known for its beers , its patron saint St. Gummarus and Lierse vlaaikes cake. It is also home to the world headquarters of Van Hool, a global bus and coach manufacturer. Lier's two principal football clubs are K. Lyra-Lierse and Lierse Kempenzonen .

The etymology of the name Lier is still under debate. It most likely refers to the river Nete and the muddy soils that surrounds it. The Latin name of Lier is Lyra, the suffix of which is probably derived from the Germanic or Keltic reference to river. Alternatively, the origin might be the Germanic words Ledo or Ledi, which both refer to a location near the confluence of rivers . Other explanations include the old Dutch word laar or the word liere . There is also a resemblance to the Swedish word leira, which means muddy shore, or the Icelandic word leir, which means clay. An all together different explanation is the Germanic word hieura, which refers to a hillock type of country.